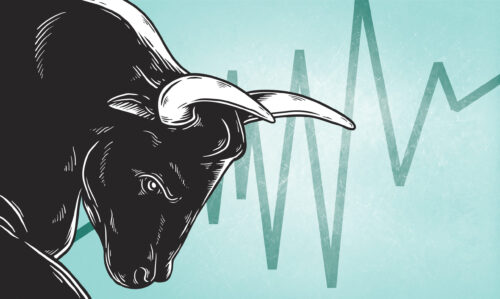 Everyone has a bullish or bearish disposition. I won’t call it a bias, because lots of traders like to claim they have no bias.

Disposition goes beyond bias. I think our disposition is formed by our life experiences and the resulting attitudes toward risk. It is how we frame our character and our decision making. When applied to markets, our disposition defines our beliefs of what will happen.

Bulls can seem at times like wild-eyed optimists. They see new innovations as life-changing solutions to all the world’s problems, and that innovation is all the market needs to continue higher. That, and a loose monetary policy.

Bears take a more measured approach. They understand new developments sometimes displace problems rather than solve them. They also understand that loose monetary policy can lead to perilous market conditions.

If you couldn’t tell, I’m of the latter camp. I’m always looking for the problems in the world.

And right now, I see that many can’t be solved.

Ever-increasing government trillion-dollar deficits. The Federal Reserve’s easy money policies that leave it unprepared for the next recession. Underfunded pensions that will force several states to increase taxes beyond reason. Immigration crises that threaten to explode in Europe and the U.S.

Each of these will impact society and markets negatively, in the long run.

But these problems won’t manifest tomorrow and make markets crash.

In the short run, the data is actually quite bullish for the stock market. And today, I want to share some new research I’ve been working on.

This Is What Actually Makes Stocks Bullish

For years, I’ve understood that investor sentiment explains why stocks move. I’ve spent many hours trying to quantify this insight.

However, new research is taking a different approach. There’s a theory now that sentiment drives cash into the stock market, and that leads to the price changes.

This sounds obvious. If more investors are buying than selling, then prices should go up. When the sellers are acting with more urgency than the buyers, prices should fall. But in a recent paper, researchers have quantified this relationship.

They found that cash inflows from individual investors are the primary factor driving bull and bear markets. While individuals are a smaller part of the market than institutional investors, this insight makes sense.

Managers of indirect investments are constrained in how they put funds to work. ETFs and mutual funds have to set aside a certain amount of cash for operating expenses. Pension funds also invest within limits, sometimes only investing 60% of assets in stocks.

Because institutions are constrained in how they invest, the cash flows into these investments tend to have a relatively predictable impact on the stock market.

The unpredictable part of price trends comes from the direct investments of individual investors.

I realized that years ago but was thinking of it in the wrong way. I thought sentiment indicators would be able to predict trends.

Really, we should forget about indicators and just focus on how much cash is moving in or out of the stock market.

What’s great about this is that individual investor inflows can be measured and anticipated. That’s what I’ve been researching over the past few months. And it’s opened my eyes to a possible top level for stocks before a new bear market.

Cash can move into stocks from a finite number of sources. Individuals can allocate some of their current income to investments. They can also move money from savings accounts or fixed-income investments into stocks. Even mortgage refinancings, popular with today’s ultra-low rates, are a source of investment capital.

All of these sources can then be quantified. For example, research from the Federal Reserve shows that about 12% of all cash-out refinancings ends up in the stock market.

All that data allowed me to create a model that led to a startling conclusion.

If I had to pick a year equivalent, it looks like we’re in 1996 to me. That was the year when then-Fed Chairman Alan Greenspan said he saw irrational exuberance in the stock market.

Greenspan was right. But he expected irrational exuberance to precede a sell-off in stocks. Instead, it led to a spectacular bull market.

The S&P 500 more than doubled after that speech and delivered average gains of more than 24% a year over the next three years. The Nasdaq did even better, gaining over 300%.

Markets didn’t go straight up. There were sharp pullbacks in 1997 and 1998. But bullish individual investor sentiment pushed cash into stocks and prices rose.

We are sitting at a similar point today. The impending melt-up is likely to last for the next few years. Most likely into 2024 when the presidential election will create enough uncertainty to end the bull market.

I crunched the numbers and, based on current cash flows into stocks, I have a price target of about 6,100 in the S&P 500 in the next 6 to 9 months.

That will be the time to aggressively sell stocks.

As we move through this bull market, I’ll be updating my model and sharing new targets with you.

My bearish disposition tells me this will all end badly. It will actually end very badly.

But my models tell me to ignore that for now. For now, it’s time to be aggressive and benefit from the melt-up.

Chart of the Day:
Is This Really Possible? 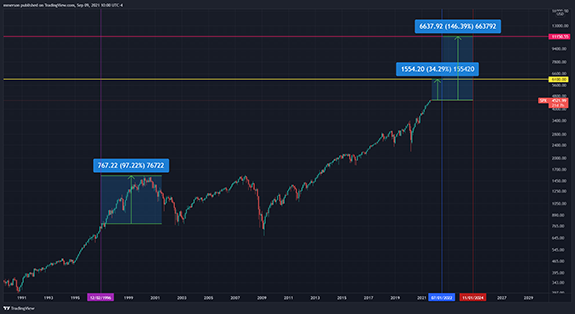 Today I want to do something a bit different…

Mike’s S&P targets are almost hard to wrap your head around. So let’s plot them on a monthly SPX chart and try to imagine how the market gets there.

I’ll use a logarithmic chart, so the price increases over time are a bit more digestible.

It looks like an absurd move for the S&P to have to make in nine months. But really, if we look at the action of the past six months, it’s not all that unusual.

The S&P has to gain 1,569 points on this chart to reach the target. That’s actually just a bit more than the difference between the S&P 500 now and its pre-pandemic highs. From the depths of the pandemic, now about 18 months ago, the S&P has risen more than 2,000 points.

Plus, take a look at the price action back in December 1996 (purple line), when Greenspan famously coined “irrational exuberance.” As Mike pointed out today, the S&P jumped nearly 100% from that speech to the top. By comparison, a rise to 6,100 by next year seems downright reasonable.

Finally, the pink line is Mike’s longer-term SPX target, and the vertical red line is November 2024 — the date of the next presidential election. We’re about 150% away from that level.

Here’s the point… The market is likely about to surprise all of us with the price moves coming.

But if we discount the possibility of such extreme price moves, we won’t adequately prepare for them.

Let’s keep an eye on this chart in the coming months, to see how Mike’s price targets shape up…