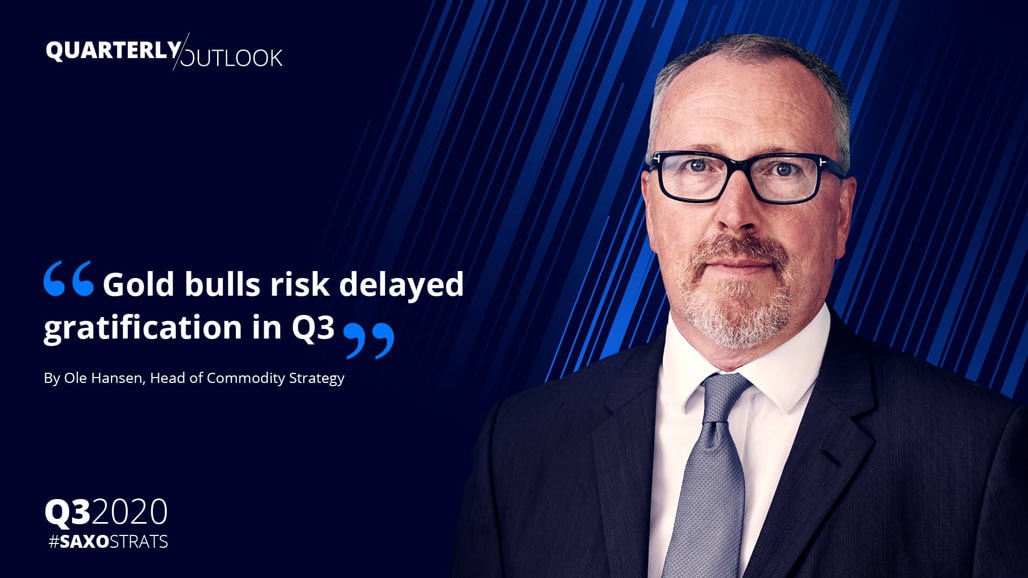 Gold’s ability to frustrate, then eventually reward, the patient investor is likely to be on full display during the third quarter.

The Covid-19 pandemic’s impact on the global economy will become increasingly apparent during the third quarter. While the Q2 was mostly about putting out fires and preventing a total collapse of the global economy, the repair work now begins in earnest. Since April, the economic impact of months of lockdowns had been painted over by a massive rally in global stock markets. However, support from the Fed (wall of liquidity), TINA (there is no alternative) and FOMO (fear of missing out) has started to show cracks.

The belief that we can and will return to normal within a few quarters will most likely turn out to be wrong, not least considering the often-embarrassing shortfalls in key supplies some rich countries experienced during the early stages of the pandemic. As our CIO Steen Jacobsen writes in the intro, we fear that Covid-19 may speed up the deglobalisation process that started with the US-China trade war, while also signaling the death of free markets as the primary driver of economies.

It is with these developments in mind that we take a look at what may lie in store for key commodities during the coming months. This period is likely to see low to negative growth, rising levels of debt and eventually rising inflation driven by the growing cost of national self-sufficiency.

Gold remains the only key commodity to show a positive return so far in 2020. Following April’s rollercoaster ride it has settled into a range around $1700/oz. Gold’s ability to frustrate, then eventually reward, the patient investor is likely to be on full display during the third quarter. Multiple positive tailwinds are currently being offset by what we believe will be a short-lived decline in inflation.

We maintain our bullish outlook for silver, and for gold now that its premium to silver has narrowed. There are several reasons to believe that gold will make a move to at least $1800/oz in 2020, followed by a fresh record high in the coming years:

The lack of momentum since April and the disinflationary environment currently playing out have driven a 55% reduction in bullish gold futures bets since the early 2020 peak. A positive change in the fundamental or technical outlook are likely to force traders off the fence and back into the market. This development could also see gold break higher.

Silver’s record cheapness to gold helped drive a strong recovery in late Q2. Our bullish outlook for gold will take silver higher. But given its often-volatile behavior, and the current growth outlook, we think silver may struggle to recover more ground versus gold. The gold-silver ratio, a key measure of relative strength, may in a best possible scenario reach 95 ounces of silver to one ounce of gold. A major second wave of the pandemic, however, may see it weaken back towards 110 – reflecting a 10% underperformance from current levels.

HG Copper’s recent recovery to pre-pandemic levels will challenge the metal’s ability to reach higher ground in Q3. A recovery in Chinese demand combined with supply disruptions at mines in South America were the triggers that finally forced speculators back into long positions following the break above $2.50/lb. The risk of a second wave – especially in the US and China, the world’s two biggest consumers – may force a rethink and we see no further upside during the coming quarter.

The outlook for crude oil demand remains challenged by the not-yet-under-control Covid-19 pandemic. While OPEC+ have made a gigantic effort to support the global market through record production cuts and high compliance, the potential for crude oil to reclaim further ground will be limited during the second half of 2020.

Cross-border travel restrictions by land and air remain in place around the world, and with millions of workers unlikely to get their jobs back anytime soon any recovery in oil demand may prove slower than expected. Even at this early stage, some are starting to speculate whether global demand reached a peak in 2019 from where it will begin to decline.

Going forward, we are likely to see a collective change in how we as humans and countries behave and interact with each other. Some of these changes in preferences and behaviour could create lasting changes in global energy consumption:

A second wave will not generate a repeated demand shock similar to the one witnessed during April. Most countries will instead opt to keep as much of their economy open as possible, given that the economic fallout would be even worse. The collapse back in April, however, still highlights oil’s ability to overshoot. While we expect the price of Brent to recover back to a $50 to $60/b range in late 2020 or early 2021, the short-term outlook points toward consolidation, with the price potentially spending most of the third quarter within a $35/b to $45/b range.