Unusual Options Activity: Traders Are Banking $2.5 Million on These 4 Stocks 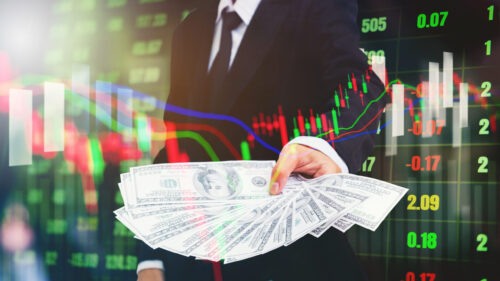 Last week, for example, traders were going big on beaten-down stocks. Each one of the options trades I’ll highlight today were on stocks that are lagging the market.

It makes sense. We’ve seen some volatility in the market, with just a few stocks leading us higher and others getting whipsawed around. It’s only natural for options traders to start looking for oversold moves to bet on those stocks playing catch-up.

This is actually part of my strategy in Quick Hit Profits, where I use a Relative Rotation Graph (RRG) to spot turning points in beaten-down companies.

I do this because I’ve learned most companies don’t stay leading or lagging the market for long. In fact, the average time is just over a week…

That means stocks spend most of their time on the move — from leading the market, to weakening, then lagging — before they improve and eventually lead the market again. This cycle is the whole concept behind the RRG.

So I love seeing traders bet on stocks to put on short-term rebounds. And the heaviest bet came in on a high-flying stock from earlier this year…

A High-Risk, Big-Money Play on Cannabis

Cannabis companies like Canopy Growth Corporation (Nasdaq: CGC) have been extremely volatile since states began legalizing recreational cannabis. Their golden days were back in 2018, when they were in a massive bubble.

CGC also saw a big run in February, almost reaching the 2018 highs. But since then, shares have nosedived more than 60% to around $20 a share.

But one trader stepped in last Thursday — as the stock traded down more than 2% on the day — with a hefty $1.5 million wager for the stock to rally 20% over the next month. 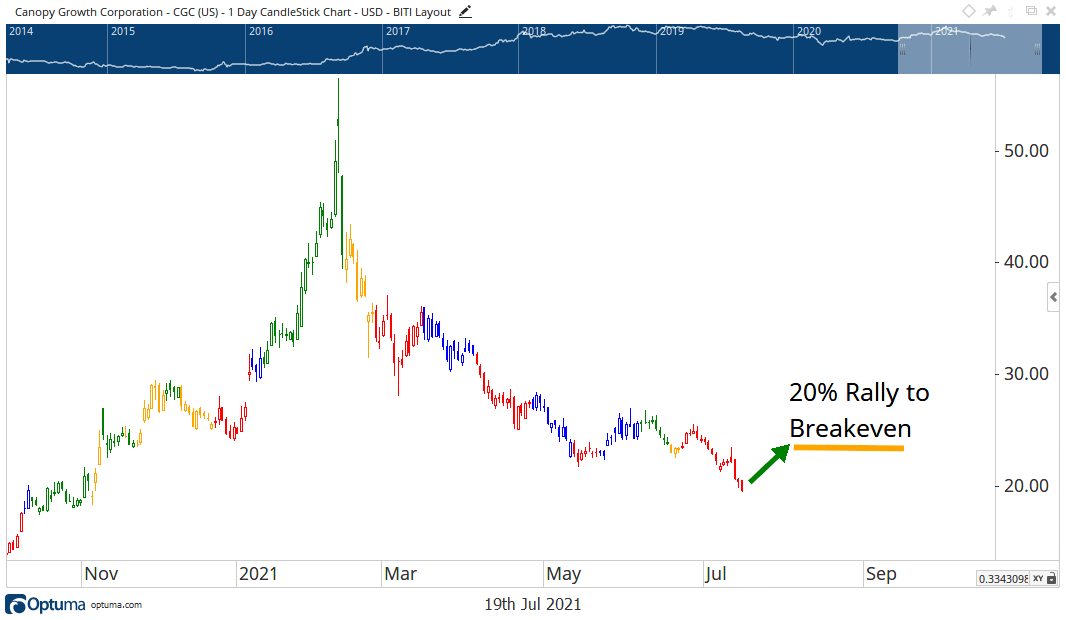 I shaded the prices on the chart based on the RRG — with red being the lagging section, blue improving, green leading and yellow weakening.

Even though the stock has plunged 60% from the peak, it wasn’t straight down. The stock went through several periods of lagging, improving and even leading the market in between. So it’s not unreasonable to think CGC could turn around here.

Since this was a clear directional bet, it means they stand to lose everything from this trade if the stock fails to climb. And CGC needs to climb about 21% just for this trade to break even.

When someone’s willing to put up big money on a high-risk, short-term move, I take notice … and you should too.

And that’s far from the only major risk-taking my scanner picked up this week.

3 More High-Risk Moves to Keep on Your Radar

Since the option expires this Friday, they went with a strike just above where the stock was trading. That means the trader only needs to see the stock jump 3.5% this week to hit breakeven, and score a sizeable payday.

You may recall that the last time we highlighted banking stocks in UOA, they put up some monster returns — in one case 622%. So this is one to watch…

Lordstown Motors (Nasdaq: RIDE), an electric vehicle manufacturer, has plummeted more than 70% since a peak in February. But one trader is willing to put up $380k on a bounce higher.

For them to hit breakeven, the stock has to climb to $10.38, or 21% above the price it closed at on Friday. It’s interesting that these buyers jumped in after the stock rallied 10% in a single day. There was no news to move the stock … but it is a volatile company that sees 5% to 10% swings pretty often.

That means a 15% jump over the next two weeks is well within reason.

The last company is Royal Caribbean (NYSE: RCL). I reviewed RCL back in May on my Bank It or Tank It YouTube series and put it on my Bank It list.

Since then, the stock has popped 15% … before giving up those gains and trending lower.

Honestly, it looks like they’re just throwing away a quarter million here. The stock needs to pop 22% in less than a month for it to pay out. I’d be surprised to see that happen.

But, a key reason some large firms and whales in the market will still wager $275k on a whim, is because if the stock jumps 23% — just 1% more — they stand to double their money.

Let’s say they’re right and the stock jumps 25% over the next month. This trader would bank nearly $1 million.

The odds seem slim. But RCL is expected to have an earnings report on August 9. An earnings surprise could light a fire under the share price, and get the stock where this trader needs it right before expiration.

Again, some of these traders have money to burn and don’t mind wagering $275k for a chance at a million-dollar payday. For most of us, this isn’t a bet we’d like to place.

But we don’t have to take this exact trade, of course. We can take these bets as conviction that the stock is going to move … and place our own, more conservative trades.

For example, you could buy an option that’s closer to the money. That way, you wouldn’t need the stock to move as far just to break even.

Just like with any UOA trade — be smart, take profits quickly and never risk more than you can afford to lose.